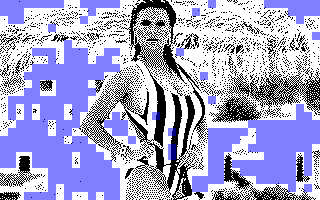 And here are all the matches highlighted:

The probability of finding duplicate characters decrease when more colors are added (the 8-bit version of the image does not contain any duplicated characters) so a strategy for achieving better compression would be to allow a certain degree of mismatch. If two characters are similar to a certain degree, they can be treated as same. If the threshold for treating two characters as similar is too high, no compression will be achieved. If the threshold is too low, the image will look a bit off.

If I only look at average color of the character, these 429 cells are similar enough to be interchanged with another character:

Of course, the compression level should be slightly lowered for a perfect result, but there are lots of other measures that can be taken. Similarity can be defined in a more sophisticated way than a close average brightness and hue. For photographic images: The threshold for equality could be higher when the detail level is high (in this case, in the center of the image) and lower when the detail level is low. But for pixeled images, top-down-left-right-scanning is good enough. As a conclusion, this is the same image with a slightly lower compression level, still with room for the previous mentioned possible improvements:

A slightly lower compression level increases the output quality significantly, but I am convinced that a more intelligent compression engine will do an even better job.